The Media Club at the University of Management and Technology (UMT), one of the major universities of Lahore, organized a training event dubbed the Social Media Colloquium on Thursday and I along with two others were invited as speakers/trainers.

Other speakers were Rohan David, Fozia Chughtai and my aide Hanzla Sajid who was kind enough to wear a Guppu.com tee as well. 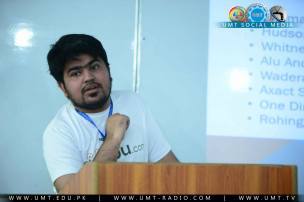 The seminar kicked off with my talk on the topic of “News in the age of Digital Media” and briefly covered the crucial topics including virality, blogging, how new media is reshaping how news is reported, why/how to brand yourself online, how social media can be used to land a better job and some of the challenges including net neutrality and censorship.

I also spared a few minutes for my trainee Hanzla so he can tell a personal account of how he took my advice and used it to brand online better and how it helped him.

Next up was Rohan David Emmanuel whose interactive session covered how crucial it is to position your product well online. It included various examples of giving proper image to a brand, how social media is helping the small businesses and not to mention engagement of the audience. He is of the view that Facebook is THE social network and I agree. I mean Google seriously has to watch its back if Facebook’s recent investment in videos has matched the views that YouTube gets.

The conclusive session was by Fozia Chughtai who narrated how internet and social media helped her working as freelance voice over artist, host and radio personality. She also mentioned how she is sharing her success with other women through her non-profit Nida Welfare rotary club. She urged the participants not only to use social media for their advantage but also to help others using this technology.

At the end, the speakers were presented with seminar souvenirs. I shared mine with my trainee but the media club was kind enough to promise they’ll present him a separate one.

And then there were a few crazy selfies…

Overall, it was a very successful because it offered a lot of learning for the young and vibrant participants to take away. I’d especially like to thank and congratulate UMT’s Media Club for such an initiative and hope they continue offering more learning opportunities to the students.

Special thanks to the club members Ahmad Nawaz ul Ghani (the genius president, organizer), Arslan Sheikh (the kickass host and vice president), University’s rector Dr. Hassan Suhaib Murad, Director of Office of Participants Affairs (OPA) Mr. Rana Iftikhar Ahmad, Manager OPA Sheraz Anwar Siddiqui. Apologies to those whose names I have missed, they can write to me through Club’s president and I’d be more than happy to mention their name too.

Visit my Talks & Presentations page to see more of my appearances